How do you feel about your reputation that you simply aren’t a warm person?
I understand that. I think it’s genetic. I don’t want to blame it on my parents and my grandparents. But you don’t need to be all that warm when you’re born and raised in Linton, Ind., and working in a coal mine. They weren’t hiring coal miners on the basis of their personalities. Inside, I feel like everything’s firing properly. And then when I look at a videotape, I just think, What the hell is Dave [angry] about? When in fact I’m not [angry]. We used to do that with my mom. We’d say, “Mom, are you all right?” Because she’d sit there looking dour. And she’d say [shouting], “I’m fine!” It’s the Golden Rule. I try to be nice to people who are nice to me. I like doing nice things for people. It makes me feel good. But I think it’s legitimate.
It’s a fair assessment?
Let’s blame Jack Paar. Years and years and years ago, before the late-night shows, he said to me [whispery Jack Paar voice]: “You know what, pal? It’s O.K. to let people know you’re upset about things.” And so I thought, well, maybe there’s some wisdom to that. I might have used that to my own disadvantage, sometimes.
The last “Late Show” airs on a Wednesday. What will you do Thursday morning?
I will be completely in the hands of my family. I will be going, later in the month, to the Indianapolis 500. And then beyond that, for the first time since Harry’s been alive, our summer schedule will not be dictated by me. It will be entirely dictated by what my son wants to do. And I think that’s pretty good. After you take a good, solid punch to the head, you’re just a little wobbly. I think in that state it would be good to have others making my decisions. That’s how he’s describing his retirement. A good solid punch to the head. 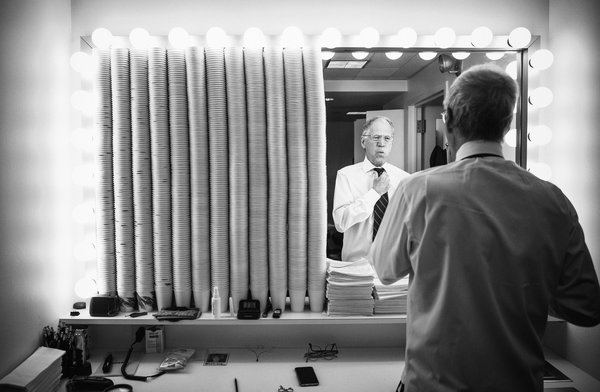