2 litterære artikler i i New York Times i dag -


In one of the most intriguing elements in the lower-court proceedings, Mr. De Caro also testified that he had several copies of Galileo’s “Siderius Nuncius” forged in Argentina, including one that he placed in the national library in Naples, and that he had taken the original. Last year, Nick Wilding, a scholar, uncovered the forgery.
Asked on Monday outside the courtroom in Naples how you go about forging a book by Galileo, let alone one that was sold at auction and fooled some of the world’s leading experts, Mr. De Caro smiled with excitement.
“Borges, in ‘Ficciones,’ wrote that when a book is false, it is equal to, if not better than, the original,” he said. One of his lawyers quickly approached and said the conversation was over.

Over the past two weeks, Mr. Grunberg has spent several hours a day writing his novella, while a battery of sensors and cameras tracked his brain waves, heart rate, galvanic skin response (an electrical measure of emotional arousal) and facial expressions. Next fall, when the book is published, some 50 ordinary people in the Netherlands will read it under similarly controlled circumstances, sensors and all.
Researchers will then crunch the data in the hope of finding patterns that may help illuminate links between the way art is created and enjoyed, and possibly the nature of creativity itself.
“Will readers of Arnon’s text feel they understand or embody the same emotions he had while he was writing it, or is reading a completely different process?” said Ysbrand van der Werf, a researcher at the Netherlands Institute for Neuroscience and the VU University Medical Center in Amsterdam, who designed the experiment with Jan van Erp of the Netherlands Organization for Applied Scientific Research. “These are some of the questions we want to answer.”
This experiment is connected with the burgeoning field of neuroaesthetics, which over the last decade or so has attempted to uncover the neural underpinnings of our experience of music and visual art, using brain imaging technology. Slowly, a small but growing number of researchers have also begun using similar tools to scrutinize the perhaps more elusive, and perhaps endangered, experience of literary reading.
Last year, researchers at Stanford University drew headlines with the results of a functional magnetic resonance imaging (or fMRI) experiment showing that different regions of the brain were activated when subjects switched from reading Jane Austen’s “Mansfield Park” for pleasure to reading it analytically. And this fall, a study out of the New School for Social Research showed that readers of literary fiction scored higher on tests of empathy than readers of commercial fiction, a finding greeted with satisfied told-you-sos from many readers and writers alike. 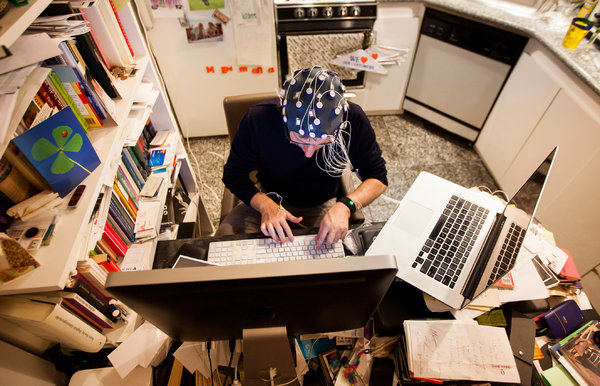