"We begin in Austin, Texas in the second half of the 20th century, before flashing back to a time when all matter in the universe exploded outward in a radiance of creation, forming the earth and all living things, including a confused prehistoric animal, who injures its leg by a river. We move forward again, the earth takes a more familiar shape; we’re in the deserts of the American West, and eventually back to Austin, where our narrator mourns a premature death with mixed empathy and survivor guilt in a profound display of interconnectivity.
Only this isn’t a brief summary of Terrence Malick’s The Tree of Life, but Danish author Peter Adolphsen’s 2006 short novel ‘Machine’. An English-language version of ‘Machine’ was published in 2007, around the time my girlfriend was indulging her wanderlust by reading all the translated Scandinavian literature she could get her hands on. I was interested by her description of ‘Machine’: the book is one of those stories that follows a particular object through space and time as it interacts with different objects and people, each opening up into its own distinct, digressive world, and I probably thought it was a neat, familiar metaphor for the web of life.
I had seen The Tree of Life when it came out in 2011, and when I picked up ‘Machine’ two years later I had a vague inkling that the novel and movie had a similar hook: the ancient past and familiar present, together in a chain of causality. But my pulse quickened as I began to read. Like many small-press authors, Peter Adolphsen maintains a very active social media presence, and had friended my girlfriend on Facebook after she reviewed ‘Machine’, though they’d never actually spoken. I sent him a message to ask if he’d ever seen The Tree of Life. He hadn’t.
Over email, Adolphsen describes ‘Machine’ as “in the genre of tingseventyr (fairy tales about objects).” After a brief overture, the novel, which you can read in about an hour, starts at the very beginning: the Big Bang – the expansion of time and space outwards from a single point, and the formation of the elements and everything else, “from amino acids to galaxy clusters.” The same quantity of matter has always existed, writes Adolphsen, in various recombining forms, and it is one particular piece of matter that ‘Machine’ follows.
A prehistoric horse (a mammal from the Eocene period, not a dinosaur), spooks at a watering hole, runs away, falls off a cliff, and dies. Cellular decomposition, putrefaction and the heat of the earth take their course – over several million years and a couple of pages – and the matter that had once composed the animal’s heart becomes a single droplet of oil, which is extracted in the 1970s from the Utah oilfield where an Azerbaijani immigrant named Jimmy Nash works. It is eventually pumped into the gas tank of a Ford Pinto, turns to engine exhaust, and is inhaled by the car’s owner, who, some decades later, shows up on the narrator’s doorstep coughing up blood – dying of cancer spread by that very particle that was once something else’s heart.
Adolphsen tells me that though he’s eager to see The Tree of Life, he was previously unaware of its similarities with his book. I have not reached out to Terrence Malick to ask if he’s read ‘Machine’, but it’s widely reported that he had been developing a project about the origins of life since the late 1970s. By 2007 the idea has taken shape in a script incorporating elements inspired by Malick’s childhood in Austin – where he grew up as the oil-rich grandson of Syrian and Lebanese Christian immigrants – and the lingering emotional wound left by the suicide of his younger brother in 1968. This personal tragedy informs the world-weariness of Sean Penn’s character in the present-day scenes that bookend The Tree of Life, as well as that of Christian Bale’s protagonist in Malick’s latest, Knight of Cups.
“I guess it’s a coincidence, a nice little one,” Adophsen says. “I think that many more than just Mr Malick and myself have done the Big Bang thing in some form or another; we’re not the first, won’t be the last. The birth of the universe is naturally a recurrent theme. It’s the end station for the train of where-do-we-come-from questions.”"

"The Owls Are Not What They Seem"

Etiketter: Helle Helle, Kristina Holgersen, The owls are not what they seem, ugle

"It's extra-challenging when there's less characterization involved," he says. "I mean, there's still quite a bit of character there  — he's not me, even the way of talking is a bit different. But sometimes it's hard when you have less to hold on to. Have you ever seen this movie called The Five Obstructions by Lars von Trier and Jørgen Leth? He has remake a film five different times, each with a different 'obstruction,' like it has to be animated. But the final obstruction was no obstruction at all, and that was the most difficult. That's a little bit of how I felt. If I have every choice possible, then I don't know what to do. I have no way of focusing it!" 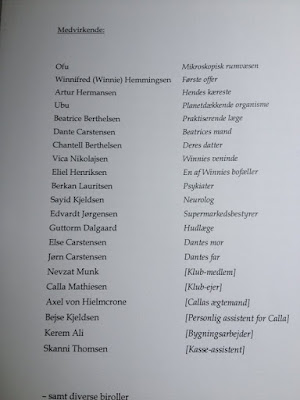 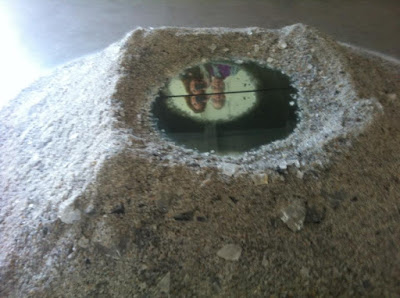 Min faster on the road 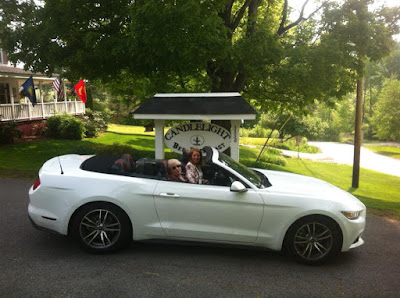 Etiketter: Else Marie Bukdahl, Lisbeth Bonde, on the road

for summer – she needs

We are united, he and I, though strangers, against the two women in front of us talking so steadily and audibly across the aisle to each other. Bad manners.

Later in the journey I look over at him (across the aisle) and he is picking his nose. As for me, I am dripping tomato from my sandwich on to my newspaper. Bad habits.

I would not report this if I were the one picking my nose.

I look again and he is still at it.

As for the women, they are now sitting together side by side and quietly reading, clean and tidy, one a magazine, one a book. Blameless.

A Story Told to Me by a Friend

A friend of mine told me a sad story the other day about a neighbour of hers. He had begun a correspondence with a stranger through an online dating service. The friend lived hundreds of miles away, in North Carolina. The two men exchanged messages and then photos and were soon having long conversations, at first in writing and then by phone. They found that they had many interests in common, were emotionally and intellectually compatible, were comfortable with each other and were physically attracted to each other, as far as they could tell on the Internet. Their professional interests, too, were close, my friend’s neighbour being an accountant and his new friend down South an assistant professor of economics at a small college. After some months, they seemed to be well and truly in love, and my friend’s neighbour was convinced that ‘this was it’, as he put it. When some vacation time came up, he arranged to fly down south for a few days and meet his Internet love.

During the day of travel, he called his friend two or three times and they talked. Then he was surprised to receive no answer. Nor was his friend at the airport to meet him. After waiting there and calling several more times, my friend’s neighbour left the airport and went to the address his friend had given him. No one answered when he knocked and rang. Every possibility went through his mind.

Here, some parts of the story are missing, but my friend told me that what her neighbour learned was that, on that very day, even as he was on his way south, his Internet friend had died of a heart attack while on the phone with his doctor; my friend’s neighbour, having learned this either from the man’s neighbour or from the police, had made his way to the local morgue; he had been allowed to view his Internet friend; and so it was here, face to face with a dead man, that he first laid eyes on the one who, he had been convinced, was to have been his companion for life. 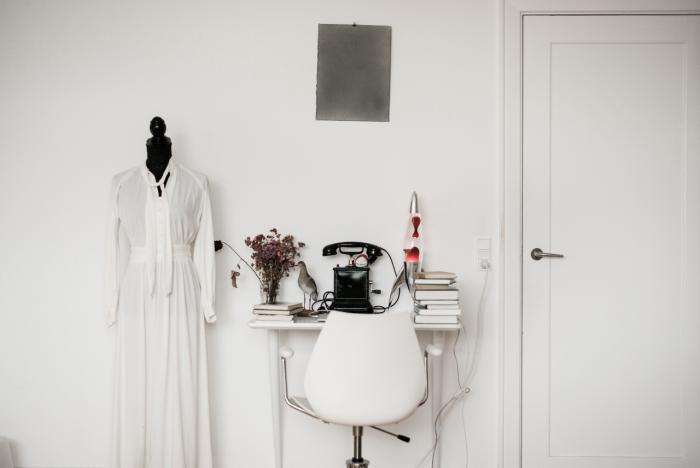