"A Trump impersonator came forth from the pit to meet his maker. “I hope you’re making a lot of money,” Trump told him, hugely pleased. “Melania, would you have married this guy?” he asked his wife, and I imagined Melania rearranging the diamond planes of her face to acknowledge receipt of the joke. She wore an outfit best described as Sensual Band-Aid and took small, ruthlessly edited steps. The last thing she ever tweeted was “Happy Fourth of July!” with a picture of an American flag, two weeks after her husband announced his candidacy for president of the United States.

Some of the darkest boos arose when he pointed to us in our journalistic zoo. “The Fed owns cows!” I almost volleyed back. Cheers arose when he mentioned Christmas, building a wall between the United States and Mexico, and the virtues of waterboarding. Trump appeared to wish something worse than waterboarding would be invented. He appeared to wish terror suspects would be placed under Niagara Falls and ordered to catch it with their mouths. The terms and exhortations blended together, until you thought, “Well, hell. Why not build a wall out of water on Christmas?” Solve all the problems at once. Did someone, somewhere heckle the idea of us building a wall out of water on Christmas, in order to keep America safe? Trump wagged his head. “The wall’s gonna just get bigger when he has that attitude.”

The protesters were halfhearted, perhaps because of the snowstorm. The lettering on their signs was illegible; their shouts never reached my ears. A young man was hustled out by security, but as far as I could tell it was just because he was wearing an exceedingly strange hat. Farce has not been able to answer farce in the case of Trump. Nothing protesters do could be outrageous enough to meet the original spectacle. The ones who linger in the mind and narrative have been silent: a woman reading Claudia Rankine’s Citizen behind the orange head; a woman standing in white hijab, “Salam, I come in peace,” written on her paradisal turquoise T-shirt, until she was “escorted out” amid mounting cries.

It’s us, was the undercurrent. It’s just us in here. A handshake moved through the air as the speech walloped on, and then something more than a handshake. The more he spoke, the more Trump sounded like a rich man at dinner with a young woman whose passport is her face and her freshness, explaining to her the terms of the arrangement: that he would wear her on his arm, turning her toward the lights, that she would defer to him in public, that he would give her just enough of what he has to sustain her. I wrote in my notebook, “Trump is offering to be our sugar daddy? He wants to make America his trophy wife?” What he was really promising was freedom to move in the world the way he does, under his protection, according to his laws. Nobody owns me, he keeps telling us, not the lobbyists, not the Republican high-ups, not the Washington insiders. I’m not in anybody’s pocket; hop in mine. His wives, you might have noticed, grow lovelier and lovelier. It is a practiced seduction; it has worked before. We ignore it at our peril." 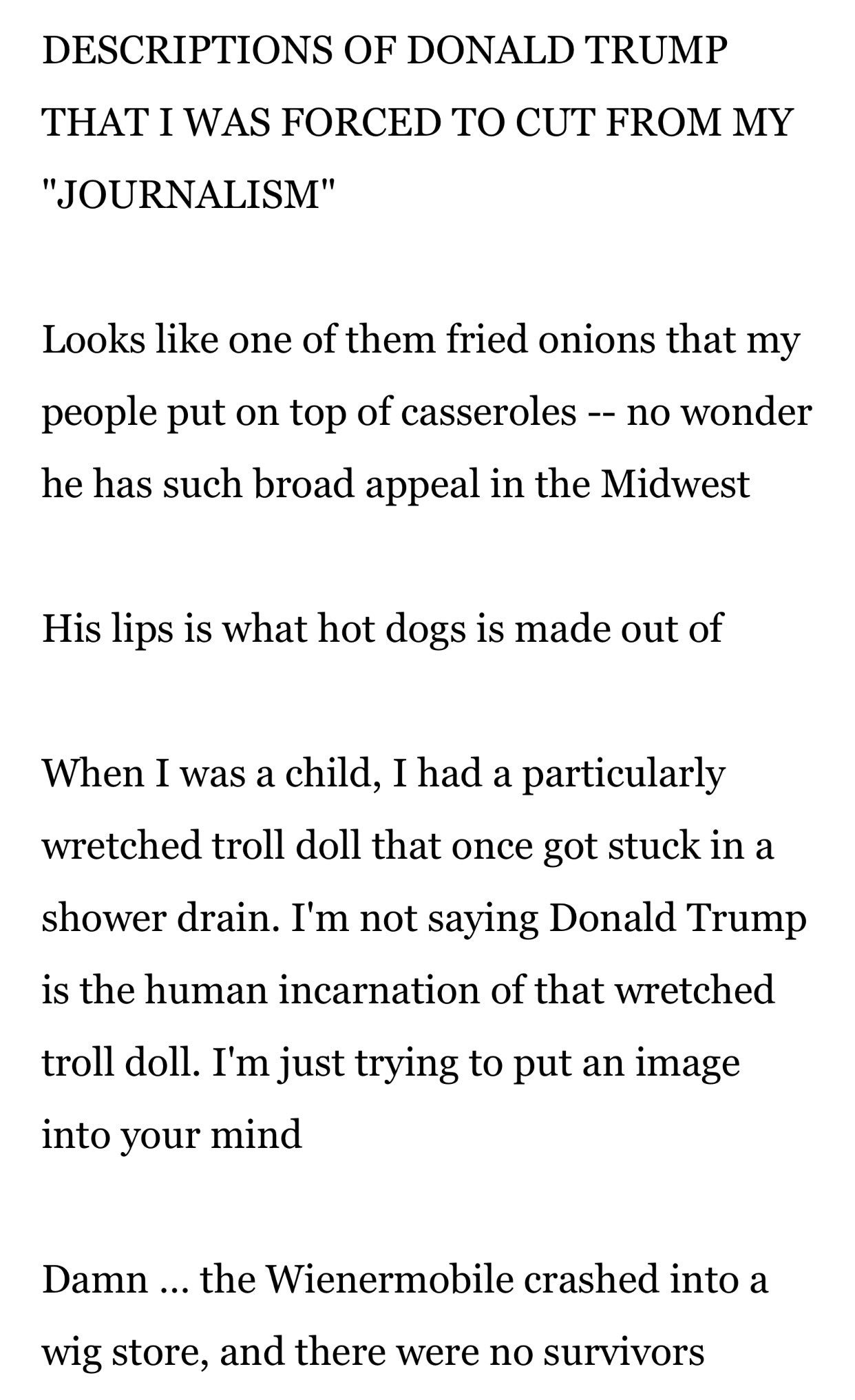