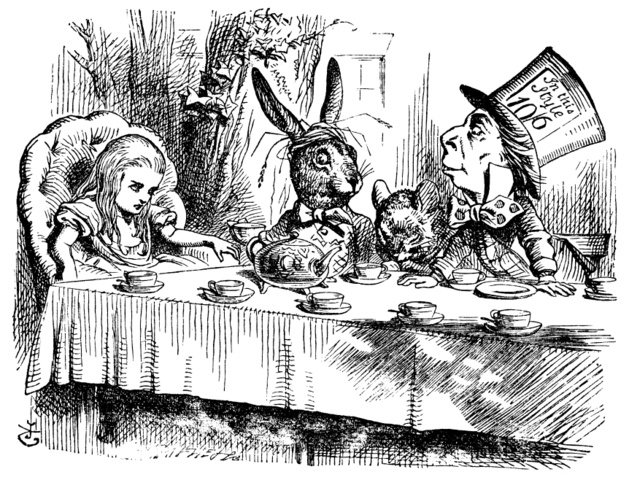 'What a beautiful belt you've got on!' Alice suddenly remarked.
(They had had quite enough of the subject of age, she thought: and if they really were to take turns in choosing subjects, it was her turn now.) 'At least,' she corrected herself on second thoughts, 'a beautiful cravat, I should have said—no, a belt, I mean—I beg your pardon!' she added in dismay, for Humpty Dumpty looked thoroughly offended, and she began to wish she hadn't chosen that subject. 'If I only knew,' she thought to herself, 'which was neck and which was waist!'
Evidently Humpty Dumpty was very angry, though he said nothing for a minute or two. When he DID speak again, it was in a deep growl.
'It is a—MOST—PROVOKING—thing,' he said at last, 'when a person doesn't know a cravat from a belt!'
'I know it's very ignorant of me,' Alice said, in so humble a tone that Humpty Dumpty relented.
'It's a cravat, child, and a beautiful one, as you say. It's a present from the White King and Queen. There now!'
'Is it really?' said Alice, quite pleased to find that she HAD chosen a good subject, after all.
'They gave it me,' Humpty Dumpty continued thoughtfully, as he crossed one knee over the other and clasped his hands round it, 'they gave it me—for an un-birthday present.'
'I beg your pardon?' Alice said with a puzzled air.
'I'm not offended,' said Humpty Dumpty.
'I mean, what IS an un-birthday present?'
'A present given when it isn't your birthday, of course.'
Alice considered a little. 'I like birthday presents best,' she said at last.
'You don't know what you're talking about!' cried Humpty Dumpty. 'How many days are there in a year?'
'Three hundred and sixty-five,' said Alice.
'And how many birthdays have you?'
'One.'
'And if you take one from three hundred and sixty-five, what remains?'
'Three hundred and sixty-four, of course.'
Humpty Dumpty looked doubtful. 'I'd rather see that done on paper,' he said.
Alice couldn't help smiling as she took out her memorandum-book, and worked the sum for him:


Humpty Dumpty took the book, and looked at it carefully. 'That seems to be done right—' he began.
'You're holding it upside down!' Alice interrupted.
'To be sure I was!' Humpty Dumpty said gaily, as she turned it round for him. 'I thought it looked a little queer. As I was saying, that SEEMS to be done right—though I haven't time to look it over thoroughly just now—and that shows that there are three hundred and sixty-four days when you might get un-birthday presents—'
'Certainly,' said Alice.
'And only ONE for birthday presents, you know. There's glory for you!'