"La Goulue (13 July 1866 – 30 January 1929) was the stage name of Louise Weber, a French can-can dancer who was a star of the Moulin Rouge, a popular cabaret in the Pigalle district of Paris, near Montmartre.[1] Besides La Goulue, pronounced [la guly] and meaning The Glutton, she also was referred to as the Queen of Montmartre.[2]

Very little is known about her early childhood, but it is believed that Louise Weber was born into a Jewish family from Alsace that eventually moved to Clichy, near Paris. Her mother worked in a laundry. As an impoverished young girl who loved to dance, Weber is said to have enjoyed dressing up in laundry customers' expensive clothing and pretending to be a glamorous star on a great stage. At age 16, she was working with her mother in the laundry, but behind her mother's back began sneaking off to a dance hall dressed in a customer's "borrowed" dress.[ 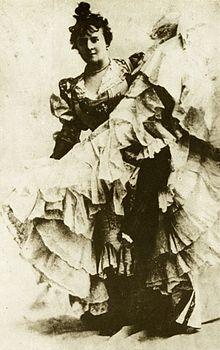 Dancing at small clubs around Paris, Louise Weber quickly became a popular personality, liked for both her dancing skills and her charming, audacious behavior. In her routine, she would tease the male audience by swirling her raised dress to reveal the heart embroidered on her panties and would do a high kick while flipping off a man's hat with her toe.[4] Because of her frequent habit of picking up a customer's glass and quickly downing its contents while dancing past his table, she was affectionately nicknamed La Goulue (The Glutton)"

"Alcoholic and destitute, La Goulue returned to Montmartre in 1928. She eked out a living selling peanuts, cigarettes, and matches on a street corner near the Moulin Rouge; no one recognized the severely overweight and haggard former Queen of Montmartre. She died a year later and was buried in the Cimetière de Pantin in the Paris suburb of Pantin, but later her remains were transferred to the Cimetière de Montmartre.[13]"