"Well, mother,’ said Kit, hurrying back into the house, ‘I think my fortune’s about made now.’
‘I should think it was indeed, Kit,’ rejoined his mother. ‘Six pound a year! Only think!’
‘Ah!’ said Kit, trying to maintain the gravity which the consideration of such a sum demanded, but grinning with delight in spite of himself. ‘There’s a property!’
Kit drew a long breath when he had said this, and putting his hands deep into his pockets as if there were one year’s wages at least in each, looked at his mother, as though he saw through her, and down an immense perspective of sovereigns beyond.
‘Please God we’ll make such a lady of you for Sundays, mother! such a scholar of Jacob, such a child of the baby, such a room of the one up stairs! Six pound a year!’
‘Hem!’ croaked a strange voice. ‘What’s that about six pound a year? What about six pound a year?’ And as the voice made this inquiry, Daniel Quilp walked in with Richard Swiveller at his heels.
‘Who said he was to have six pound a year?’ said Quilp, looking sharply round. ‘Did the old man say it, or did little Nell say it? And what’s he to have it for, and where are they, eh!’
The good woman was so much alarmed by the sudden apparition of this unknown piece of ugliness, that she hastily caught the baby from its cradle and retreated into the furthest corner of the room; while little Jacob, sitting upon his stool with his hands on his knees, looked full at him in a species of fascination, roaring lustily all the time. Richard Swiveller took an easy observation of the family over Mr Quilp’s head, and Quilp himself, with his hands in his pockets, smiled in an exquisite enjoyment of the commotion he occasioned.
‘Don’t be frightened, mistress,’ said Quilp, after a pause. ‘Your son knows me; I don’t eat babies; I don’t like ‘em. It will be as well to stop that young screamer though, in case I should be tempted to do him a mischief. Holloa, sir! Will you be quiet?’
Little Jacob stemmed the course of two tears which he was squeezing out of his eyes, and instantly subsided into a silent horror.
‘Mind you don’t break out again, you villain,’ said Quilp, looking sternly at him, ‘or I’ll make faces at you and throw you into fits, I will. Now you sir, why haven’t you been to me as you promised?’" 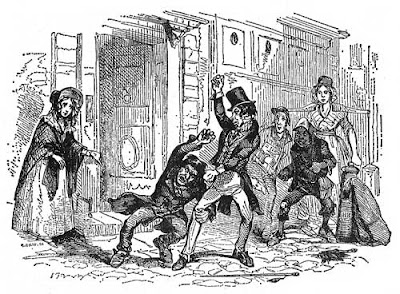