Gabriela Mistral (Spanish: [ɡaˈβɾjela misˈtɾal]; 7 April 1889 – 10 January 1957) was the pseudonym of Lucila Godoy y Alcayaga, a Chilean poet-diplomat, educator and humanist. In 1945 she became the first Latin American author to receive a Nobel Prize in Literature, "for her lyric poetry which, inspired by powerful emotions, has made her name a symbol of the idealistic aspirations of the entire Latin American world". Some central themes in her poems are nature, betrayal, love, a mother's love, sorrow and recovery, travel, and Latin American identity as formed from a mixture of Native American and European influences. Her portrait also appears on the 5,000 Chilean peso bank note. 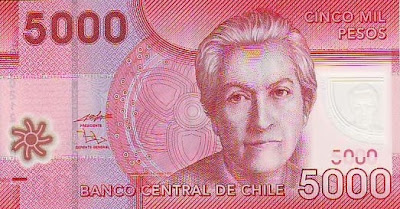 Fouzia Azeem (Urdu: فوزیہ عظیم‎; 1 March 1990 – 15 July 2016), better known by the name Qandeel Baloch (Urdu: قندیل بلوچ‎), was a Pakistani model, actress, woman's rights activist and social media celebrity. Baloch rose to prominence due to her videos on social networks discussing her daily routine and various controversial issues.[1]
Baloch first received recognition from the media in 2013, when she auditioned for Pakistan Idol; her audition went viral and she became an Internet celebrity.[2][3] She was one of the top 10 most searched for persons on the internet in Pakistan and both celebrated and criticised for the content of her videos and posts.[4]
During the evening of 15 July 2016, Baloch was asphyxiated while she was asleep in the house where her parents live in Multan.[5] Her brother Waseem Azeem confessed to the murder saying she was "bringing disrepute" to the "family's honour".[6][7][8]